Why is mankind responsible for the current global warming

First to understand global warming, you need to understand the greenhouse effect. In other words why are temperatures like they are on Earth while it is very different on the moon. Indeed, when sunlight hits the moon's surface, the temperature can reach 127 degrees Celsius while when the sun goes down, temperatures can dip to minus minus 173 C. The main reason for this is the atmosphere.

Below is a simplified animation of the greenhouse effect. Credit: NASA/JPL-Caltech [1]:

Scientists attribute the global warming trend observed since the mid-20th century to the human expansion of the "greenhouse effect".

Gases which contribute to the greenhouse effect

Water vapor is the most abundant and acts as a feedback to the climate. Water vapor increases as the Earth's atmosphere warms, but so does the possibility of clouds and precipitation.

Carbon dioxide (CO2) is a very important component of the atmosphere, carbon dioxide is released through natural processes such as respiration and volcano eruptions and through human activities such as deforestation, land use changes, and burning fossil fuels. Humans have increased atmospheric CO2 concentration by more than a third since the Industrial Revolution began. Total carbon emissions from all human activities reached 43.1 billion tons in 2019 [2] / [3]. In comparison, co2 out-gassed to the atmosphere and oceans today from volcanoes is estimated at 280 to 360 million tonnes so more than 100 times less than humanity's annual carbon emissions [4]

Methane is an hydrocarbon gas produced both through natural sources and human activities, including the decomposition of wastes in landfills, agriculture, and especially rice cultivation, as well as ruminant digestion and manure management associated with domestic livestock. On a molecule-for-molecule basis, methane is a far more active greenhouse gas than carbon dioxide, but also one which is much less abundant in the atmosphere

Chlorofluorocarbons (CFCs). Synthetic compounds entirely of industrial origin used in a number of applications, but now largely regulated in production and release to the atmosphere by international agreement for their ability to contribute to destruction of the ozone layer. They are also greenhouse gases.

Natural sinks take up more carbon as our emissions increase

But our ocean and land sinks could be compromised by future warming as ocans get warmer and wild fires increase, which could limit the amount of carbon dioxide they absorb, making global temperatures rise even faster than they are now. 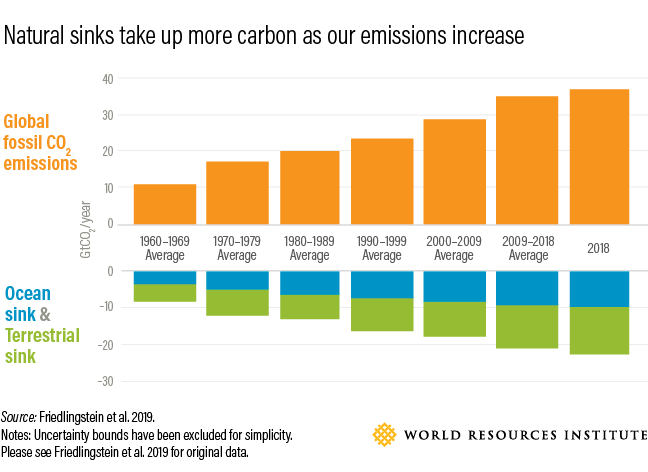 You can find more about the above here [3] and about [carbon sink] in general on wikipedia.

Could it be solar activity?

The amount of solar energy that Earth receives has followed the Sun’s natural 11-year cycle of small ups and downs with no net increase since the 1950s. Over the same period, global temperature has risen markedly. It is therefore extremely unlikely that the Sun has caused the observed global temperature warming trend over the past half-century.

It's reasonable to assume that changes in the Sun's energy output would cause the climate to change, since the Sun is the fundamental source of energy that drives our climate system.

You can read more about solar irradiance at NASA's webpage about the causes of climate change.

How sure are we climate change is caused by human activities?

According to studies, there is now a 99.9999% chance global warming is caused by human or if we put it another way there is less than 1 chance in 100,000 that global average temperature over the past 60 years would have been as high without human-caused greenhouse gas emissions. [5] / [6]

Climate scientists agree: Climate-warming trends over the past century are extremely likely due to human activities. In addition, most of the leading scientific organizations worldwide have issued public statements endorsing this position. You can find more about this on the wikipedia page about the scientific consensus on climate change [7] as well as the NASA's web page dedicated to it [8].